11893
Dortmund was at one time the most important industrial center in Germany. Thanks to the steel industry, Dortmund’s population grew from 20,000 to 600,000. When the city was struck by a crisis in the steel industry at the end of the 20th century, it didn’t give in, but instead turned it to its advantage.

The site of the factory, which for 150 years provided Germany and Europe with iron and steel, has been transformed into an ecologically clean recreational area with a charming artificial lake, and the iron-and-steel industry has been replaced by new businesses and sectors of employment.

Professor Peter Reusch of the Dortmund University of Applied Sciences is here to tell us how Phoenix Lake became Dortmund’s primary crisis-recovery project, in the process turning the city into an attractive place to live.

Professor at the Dortmund University of Applied Sciences, as well as the founder and director of the academic consortium EuroMPM (European Master in Project Management), with its “head office” in Dortmund.

– Peter, tell us what happened in Dortmund after the steel industry closed down.

The industrial crisis was inevitable for Dortmund: at the turn of the century the foundry couldn’t survive here. Dortmund grew up on steel, and after the closure of the factory the city’s population started to drop. In order to stop this process, we started working on issues of city development – we needed to make the city a place where people wanted to live.

Dortmund occupies a very large space, but during industrialization little time was spent creating recreational areas or improving the city center. For 150 years, while everyone was busy making steel, no one took the initiative to create recreation zones. With the closure of the steel mill experienced workers were left with nothing to do, but we did get a rare opportunity to create a very attractive place in close proximity to the city center. The creation of the lake let us make up for what had been overlooked – until we created it, there were no large bodies of water in the city. There’s another important detail – the cities in our region are in competition with one another. The most serious contender in terms of quality of life is Мünster. There’s a lake in the center of Мünster, and in order to compete with it we needed to create one of our own. It wasn’t even about tourism. It was about people’s living conditions. There were quite a few people who worked in Dortmund but preferred to live in Мünster. People are willing to move if the living conditions are better somewhere else. If you live in a far-away district of the city and you’re spending a lot of time commuting, then you might as well live, say, in Cologne. When talking about urban construction it’s important to remember that infrastructure is very well-developed in Germany. Our high-speed trains reach speeds of up to 400 km/hour. When you can cover 200 km in only thirty minutes, distance ceases to be a significant factor. You remain free to pick the place where you live, even if your work ties you to a certain factory. 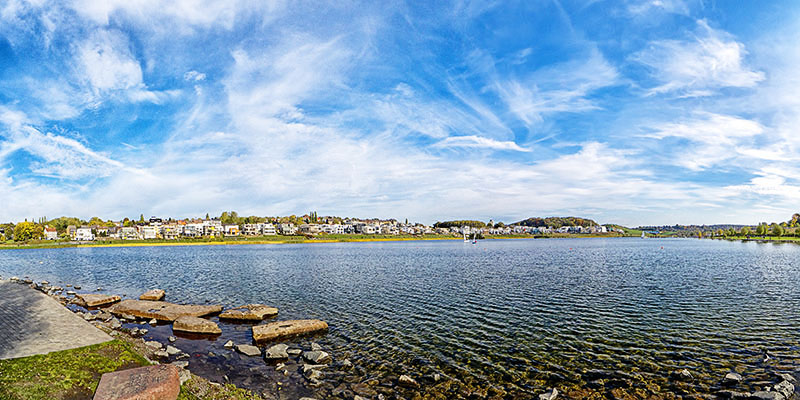 – But the former site of a steel mill isn’t exactly the best place for making a lake, is it?

It’s often done in Germany, especially in mining areas. Turning former mines into artificial lakes is its own sort of tradition, with a centuries-long history. It also has a positive effect on the city’s development. Living on the beach or next to a lake is something that many people want. People gladly buy house in areas like that, so the lake also has a commercial value.

However, the development project and the creation of the lake initially carried big risks. We could have run into sources of serious pollution or even bombs – we’re still finding in bombs in the city even today. It was clear that we needed to clear the site of concrete, earth, pipes – of which the factory left quite a bit behind.

Another risk factor was the nearby River Emsher, which used to take the factor’s runoff. The river is rather long, and cleaning it completely was impossible. There are still pollutants in the river, so we decided to isolate the lake from the river – the architects wanted to create a healthy ecosystem. But it was impossible to get away from the problem completely. When there’s too much sediment, the river’s water level rises and part of the water flows into the lake, in spite of the flood guards we’ve put in place. That’s why once a year all the water in the lake is filtered for phosphates. Balance is restored in the lake, and the growth of seaweed and plants is kept in check. The lakewater contains fertilizers that get into it from the soil. Those are also removed. 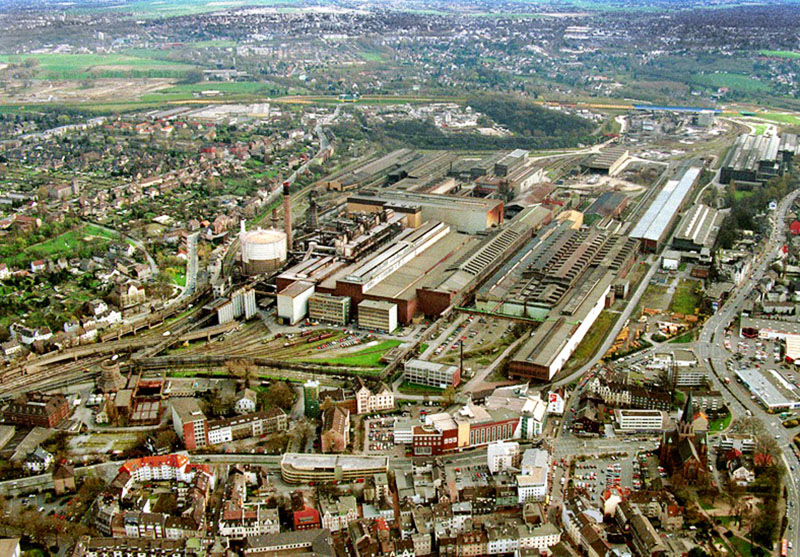 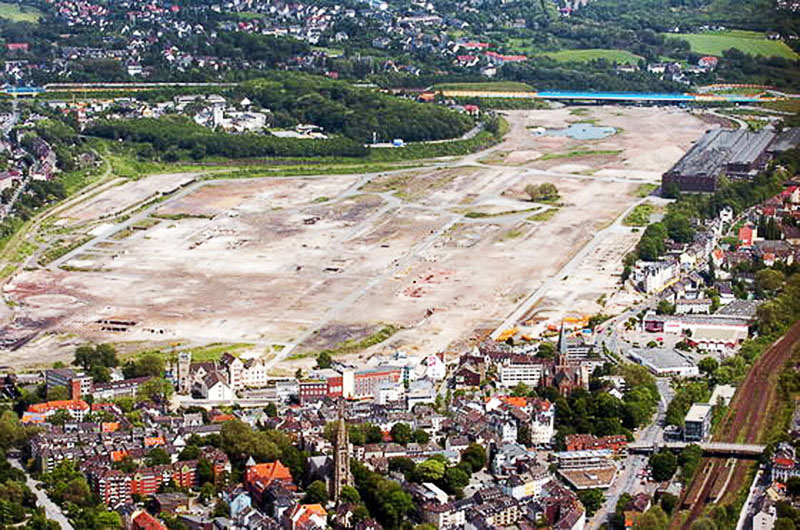 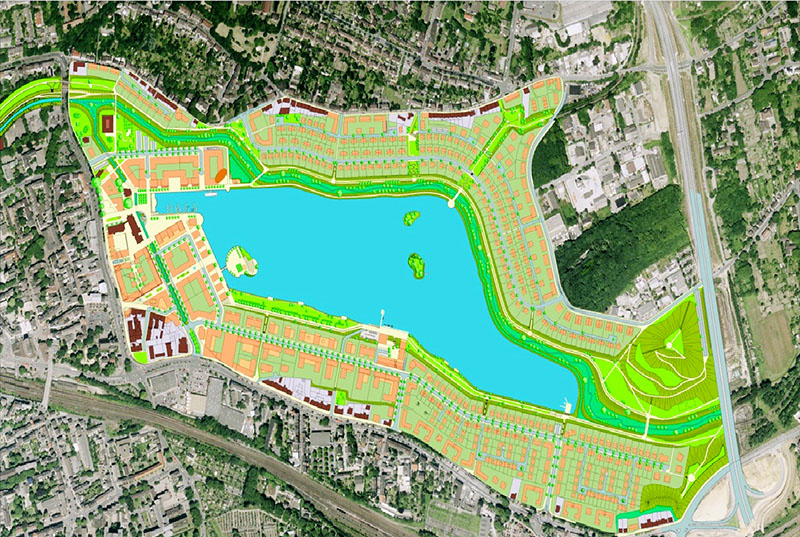 – Did construction of the lake begin right after the closure of the factory?

The development of this site is part of the city’s urban planning strategy. In 2001 the factory was shut down, and the next year the factory’s move to China began. A few years were spent on the development and approval of the development plans. By 2004 we were able to solve the main problems and buy the land. The city began construction on the site.

It was clear that we had to have the apartment houses in one area, and public buildings – offices, hospitals, etc. – in another. The authorities wanted a higher quality of living, so a large part of the high-rise buildings by the lake were demolished so that small private homes could be built. In 2010 the lake was filled with water and a small wharf was created for pleasure boats.

A group of people formed for this project – they were real urban-planning professionals. The backbone of the team consisted of no more than ten people. Of course, it attracted engineers, planners, construction experts. Biologists and ecologists played an important role – the lake had to be given the proper form so that we could solve the issues of water-filtration and lake-river interrelation.

I want to say that it’s impossible to start a project like Lake Phoenix from scratch. You have to have a lot of experience in carrying out major projects. Dortmund had a school of engineering that goes all the way back to a Prussian king. It was founded during industrialization so that the city would have good engineers. In the 1970s a technical university and campus were built. At this campus they opened a Center of Information Technologies for newly-founded innovative companies, which are growing fairly well. The city’s logistics have also developed. An airport and a port with canals were built. So we had a sizeable body of experience before the Phoenix project began.

– How is life set up around the lake now?

We couldn’t set aside the entire site of the former factory for a recreation zone – it was too big. In the western part a number of businesses, firms, and public buildings were concentrated. In the east, where the lake is also located, are private homes and small office buildings. Overall everything went well together. The character of the construction project was in large part determined by the existing transport infrastructure, which is best-developed on the western side. While planning the zones we needed to think about logistics, since various businesses participated in the project, and they each had a vested interest in their own growth.

Business on the site is now growing quickly, and many jobs are being created – it’s just that they’re of a different sort. On top of this, many residents have new, unique opportunities. For example, a few of the buildings here have been preserved from the times when the factory was still open. If you take a walk along the lake, you’ll see people who have lived there for decades renovating their old houses. By putting money into restoration, they get excellent homes in a good location, which gives them the opportunity to make good money by renting the houses out. Of course, new private homes are also being built.

Overall, Dortmund is developing at a good rate. After saying goodbye to industry, the city is putting emphasis on the service industry. For example, there are three insurance companies here, including one of the biggest in Germany. Many IT companies and energy-saving organizations are also here; there’s a major medical industry, too. The municipality invested a lot of money into recreation projects and spent millions of Euros on land purchases. Now, ten years later, the investments are making a return. People are settling in. The city handled the crisis. 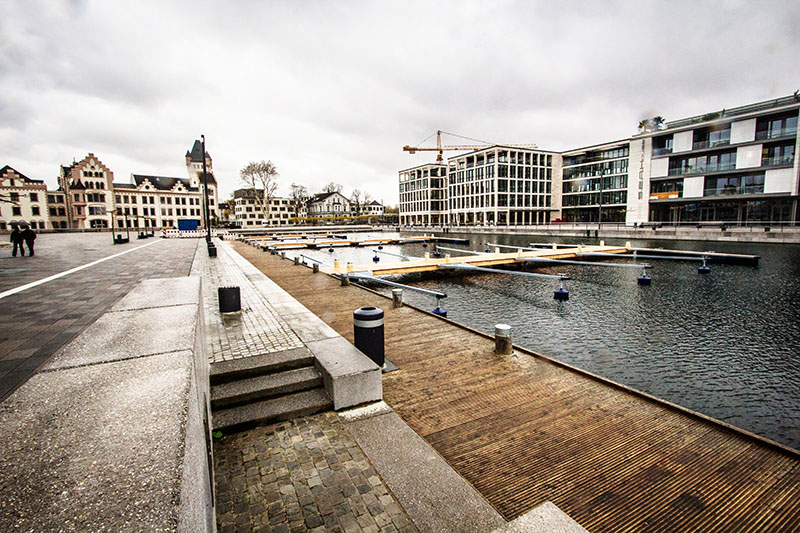 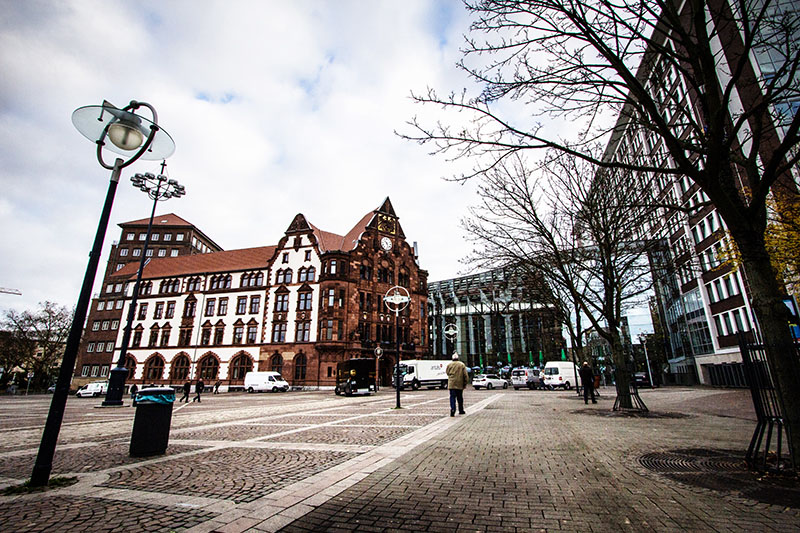 Thanks for help to Vladislav Kandalintsev.