So far Planet Earth is more or less handling the results of human activity.  However, a few small and fairly enclosed ecosystems show us what happens when nature’s powers are exhausted and man refuses to change his attitude toward the environment.

Nauru lies in the western Pacific, about 42 kilometers south of the equator, in the middle of the Micronesian archipelagos. The island has an area of 21.3 square kilometers and a population of 10,000. Nauru is the world’s smallest island state, the smallest state in Oceania, and the smallest independent republic. In area Nauru is the fourth smallest country on Earth, after the Sovereign Military Order of Malta, Vatican City, and Monaco. It is also the only republic on Earth without an official capital. 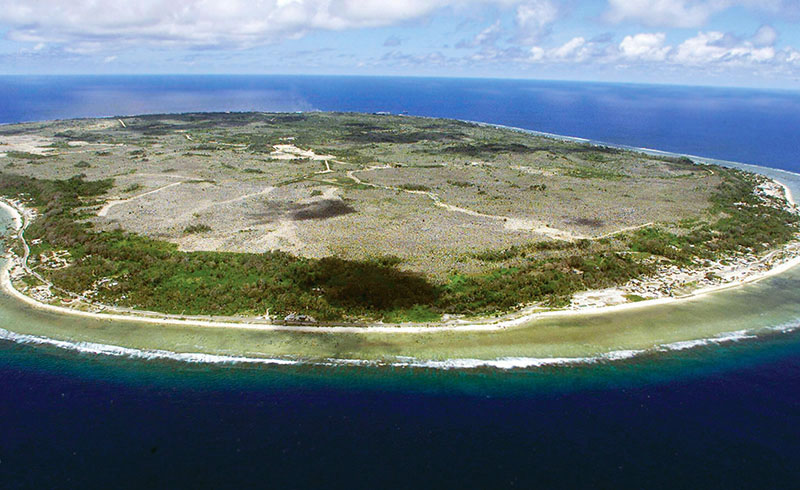 Nauru has no common borders with neighboring states, since it is far from the other islands of Oceania, being 4,000 kilometers southwest of Sidney and 1500 kilometers to the east of New Guinea.

The island is a raised coral atoll 5.6 kilometers long and 4 kilometers wide. Its coastline is 18 kilometers long, and the ocean reaches a depth of over 1,000 kilometers only a kilometer from the shore. The island is bordered by a narrow reef 120-300 meters in width, which is exposed at low-tide and studded with coral pinnacles.

Nauru was settled by Micronesians and Polynesians about three thousand years ago. It was first spotted by Europeans on November 8, 1798 – it was discovered by John Fearn, the captain of an English whaling ship sailing from New Zealand to China. The first Europeans began to settle on the island in the nineteenth century. They were in large part escaped prisoners and deserters from whaling ships visiting the islands. Later they were joined by a few European traders.

At the beginning of the twentieth century it was discovered that the island was rich in phosphate – a mineral used in the production of fertilizers. It all happened by accident – in 1897 one Australian businessman shipped stone from Nauru and made it into doorstoppers. One day he was visited by a geologist friend, who tripped over the stone and discovered it to be “stone of fertility”– phosphate.

Upon their arrival in Nauru, geologists discovered that nearly the entire island was covered in a layer of phosphate up to ten meters thick, and in 1906 the Pacific Phosphate Company, based in Australia, received the go-ahead for mining. Excavators began their work, and growing numbers of cargo ships began carrying away pieces of Nauru’s surface.

During the First World War the island was in the theater of war, and at conflict’s end was given the status of a League of Nations mandate under the joint rule of Great Britain, Australia, and New Zealand. These countries bought all the rights to the phosphate deposits from the private company, then creating the joint venture British Phosphate Commission for the development of the phosphate mines and the sale of phosphate. Intensive mining was carried out right up until the Second World War, but the local population was given only a miserly compensation.

An independence movement formed on the island in the 1940s and 1950s. On January 31, 1968 the island was granted independence. The population at that time numbered three thousand.

The new government gathered money from the entire population, bought the quarries, and, after nationalizing the phosphate company, created a new one – the Nauru Phosphate Corporation. After that the funds received from the sale of the island’s natural riches went into the state budget. The island’s land was divided up among Nauruans. A fourth of the proceeds went to landowners (who constituted about half of Nauru’s families), and the rest went into a national trust fund whose dividends went to each citizen. 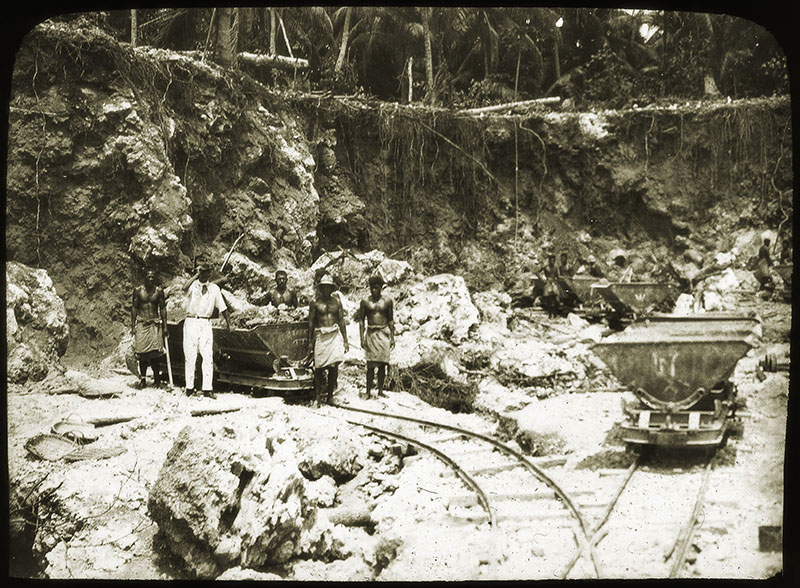 Phosphate mining on Nauru began in 1906. Most workers then were locals. It can easily be seen that the island was still covered in thick forest.

Only a few years after it began to sell its resources on its own, Nauru became so rich that Nauruans became one of the most well-to-do populations on Earth. Beginning in the mid-1970s up to two million tonnes of phosphate – worth nine million US dollars – were extracted and exported annually. The average wage on the island was four times that of the United States, and Nauru’s per capita income of more than 13,000 dollars was second in the world, surpassed only by Saudi Arabia’s. By 1986 this figure had risen to 20,000 dollars.

By this time experts estimated that the island had phosphate reserves totaling 100 million tonnes, which at the then-current rate of exploitation would be exhausted in thirty or forty years. Local residents stopped working. Workers were provided by neighboring Kiribati and Tuvalu, India and China, and the more highly-qualified professionals by Australia, Europe, and the United States. Islanders could afford to fly to Australia to go to the dentist and change cars every month. Nauruans mostly spent their money on expensive cars, electronics, food, travel, and foreign maids. A large airport was constructed, as well as a five-kilometer railway, on which the extracted phosphate was delivered to processing facilities and the port.

Each family had four or five cars. Because there was no one to service and repair them, cars in need of repair were sent straight to the junkyard. New ones were ordered in their place. People who had once eaten breadfruit, coconuts, and fish, switched to baked goods and rice. Due to their sedentary lifestyles, many islanders grew obese rapidly, and in result Nauru became the world recorder holder not only for per capita income, but also for per capita obesity and diabetes. 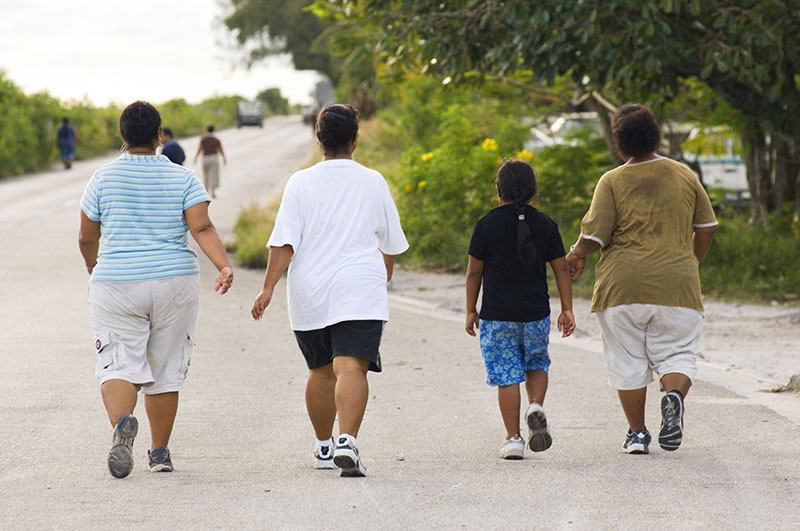 Wealth and a decreasing drive to work have taken their toll on the Nauruans’ apperance. One of the nation’s problems is obesity. 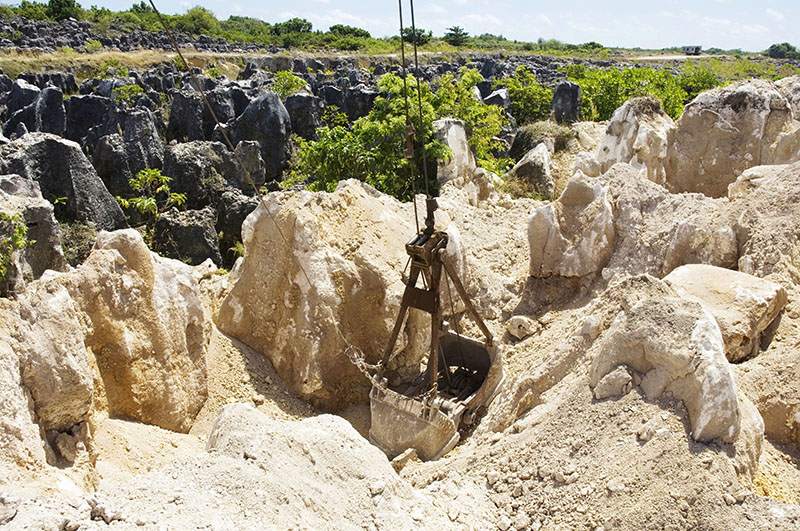 By the end of the twentieth century it became clear that the phosphate reserves were rapidly running out, and would last only another ten years or so. On top of this, new types of fertilizer appeared on the market, while the use of phosphate fertilizers decreased sharply due to its water-polluting qualities. In 2001 and 2002 the mining of phosphate decreased ten-fold – to 162,000 tonnes from the 1985/1986 figure of 1.67 million tonnes. In 2003 mining stopped completely. In thirty years Nauru had earned 3.6 billion dollars – about 4 million dollars for each family.

Nearly all the island’s infrastructure (the bank, stores, hospital, port) belonged to the mining company. The bank that held Nauruans’ savings went bankrupt. The government did not even have money for pay for imported food, fuel, and water. Foreseeing the exhaustion of its natural resources, the government naturally tried to invest in various projects – particularly ones involving overseas real estate. It bought а 53-storey office tower in Melbourne, a housing complex in Honolulu, several hotels in Australia, and real estate on Guam, but due excessive risk-taking and falling prices, the money in the stabilizing funds quickly evaporated. While in 1991 the fund had two billion dollars, by 2000 the value of its assets had sunk to 100 million, 45 million of which were transferred to Antigua to pay Australian expatriates working on Nauru. The national deficit in that year was 3.8 million dollars (about 18% of the country’s GDP). On the day the national bank crashed the country was faced with a debt of 870 million dollars. Several skyscrapers in Australian with Nauruan offices had to be sold to pay off debts. The government was forced to resort to loans. Unemployment in the country approached one hundred percent. Foreign management professionals, doctors, and teachers began to leave. There was heightened social and political instability. From 1989 to 2003 the government in Nauru changed seventeen times.

By the time of the economic collapse about eighty percent of the island’s surface (mainly its center) was occupied by quarries. Ninety percent of the island’s forests had been cut down, leaving only 200 hectares of vegetation. Nauru had been transformed from a tropical island with thick forests and a hot climate into a desert, save only for a small zone of vegetation surrounding the lagoon and a 100-meter belt of greenery along the ocean shore.

Throughout the nineteenth century Nauru was indicated on maps as “Pleasant Island.” The name was given by English captain John Fearn because of the island’s incredible beauty. Today all that remains of that beauty is a hundred-meter strip of vegetation along the coastline.

Today the most striking part of Nauru is its center, where enormous coral pinnacles were left behind by phosphate extraction. The height of these formations exceeds 15 meters in some spots, while the quarry itself is an enormous labyrinth, its countless hollows and depressions reminiscent of the surface of the moon. There is almost no soil here, and nothing grows here except for dense bushes. Because of this, rainwater is not held on the surface, but seeps through the rock. Imported soil is quickly washed away by rain – the vegetation present cannot hold it in place. All of this means that the island’s surface cannot be used for agriculture or construction.

In 1989 the Republic of Nauru sued Australia at the International Court of Justice for Australia’s actions during its rule of the island, especially pointing out the severe ecological effects of phosphate mining. Australia had to pay out a compensation, which supported the island’s economy to a certain extent.

There were also attempts to fix the situation by developing offshore banking. The island’s government in no way monitored the financial operations that took place through these offshore banks – in result more than 400 banks with accounts totaling five trillion dollars (most of which was criminal in origin) were registered on the island in the course of only a few years. Under international pressure offshore banking on Nauru was closed in 2003.

The island tried to sell citizenship, offer its telephone code to phone sex services, opened detainment camps for those waiting to receive Australian citizenship, “traded” its political support – but these all helped very little.

Today the island’s phosphate resources have been exhausted, and no new stable sources of income have been found. The island is on the verge of bankruptcy. The only reminder of the island’s former wealth are numerous junkyards, where cars bought in richer times lie and rust.

Most people on Nauru do not work anywhere. Some of them still have money saved from the time when phosphate was sold. The islanders continue to spend it, but do not earn any new money.